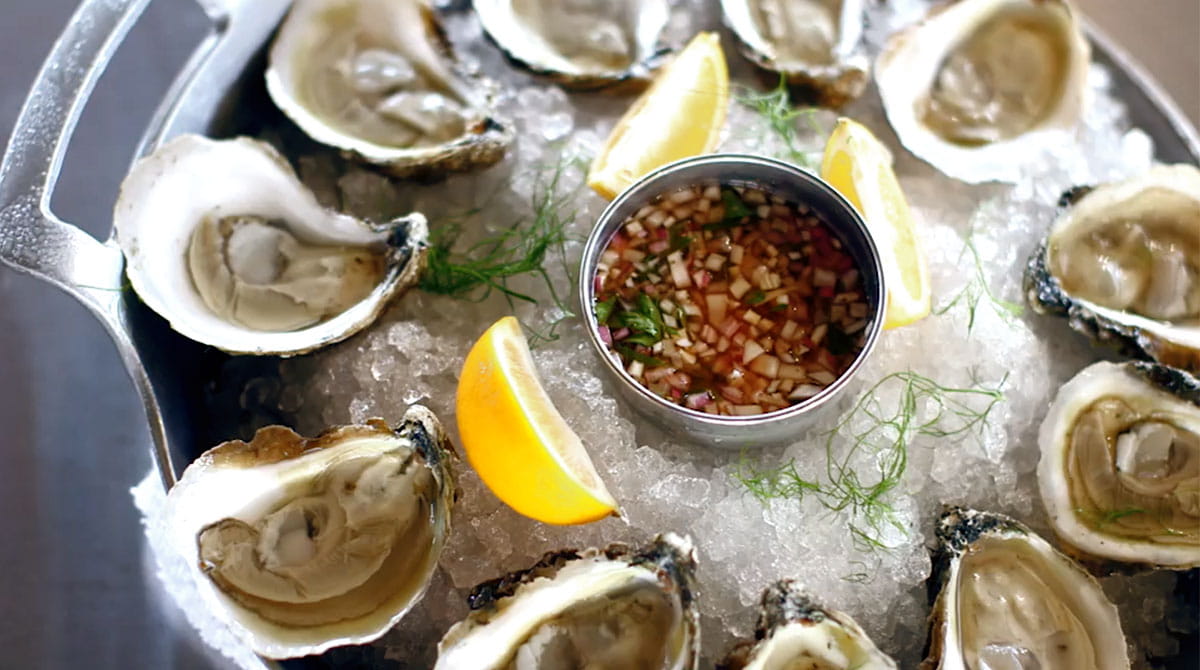 While famous for blue crabs, clams and some of the finest oysters to be found in North America, the Chesapeake Bay region gives us more than just superlative seafood - it's also home to its ideal companion, OLD BAY Seasoning. Inspired by both the region's bounty and its legendary local seasoning, Chef Gary Patterson of McCormick shares variations on a few classic dishes that are All-American, yet uniquely Chesapeake. 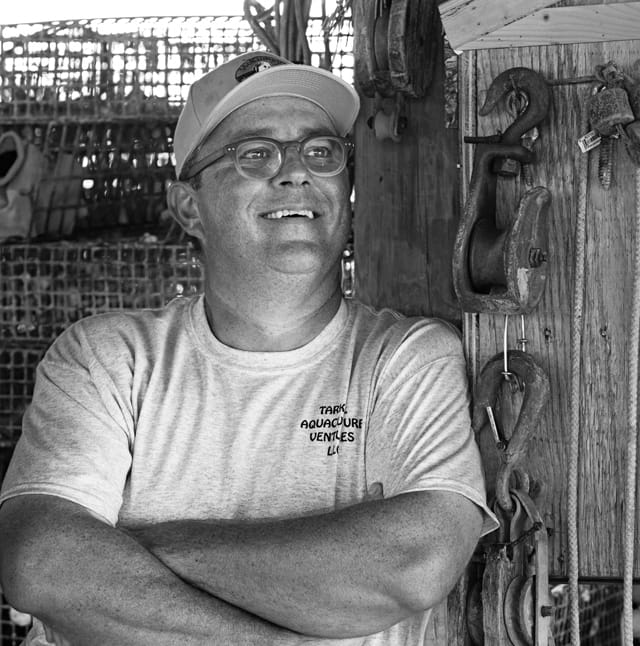 In the pristine waters where the Tarkill Creek flows into the Chesapeake Bay, you’ll find some of the best oysters on the East Coast, thanks to master cultivator Bob Boardman of Tarkill Aquaculture Ventures. Chef Gary Patterson of McCormick for Chefs and Bob Boardman of Tarkill Aquaculture Ventures discuss the nuances of oyster flavor, take in the beauty of the Tarkill oyster farm, and elevate a few classic recipes with the iconic regional twist of OLD BAY.

OLD BAY is one of those spices that is so iconic that it's considered a singular flavor all its own. How would you go about describing it to someone who has never tasted it before?

Good question. I wouldn't consider OLD BAY a singular flavor – I think it's a complex layering of many flavors. You start with that strong hit of salt, which complements the natural brininess seafood. You get a touch of heat from a blend of red and black peppers. You get the nice flavors that tie into vegetables that make up the base of so many classic dishes: onion, celery, carrots– savory, but with some sweeter notes. When they’re eaten together, it’s well balanced and certainly has the hallmarks of a signature flavor, but behind it all there’s that expert-level layering of different notes.

What is it about OLD BAY that makes it a perfect fit for seafood?

OLD BAY was originally designed specifically for seafood. Like McCormick, it was born in Baltimore right on the Chesapeake Bay – you may not know this, but it was actually named for a ship that used to ferry people between Baltimore and Virginia called “the Old Bay Line”.  Back then, crabs were extremely abundant and on every table in the region. People started looking for that point of differentiation, that “special sauce” that made their crabs a little bit more special than the next guy’s.

Outside of seafood, where else have you seen OLD BAY used that really surprised you?

Well as a Marylander, we put it on everything under the sun. It’s great on French fries, chicken – if there’s anything that’s kind of basic on its own, we throw OLD BAY on it. Probably the most interesting tradition I’ve seen down here is something called a “Crabby Boh”, which is a play on our local beer Natty Boh. Essentially you take a pint glass and run the rim with a thick coating of OLD BAY, then pour the beer in, and that’s it. Pair that with some raw oysters and you’re good.

How would you describe the flavor of a raw oyster?

Well, it’s hard to give a grand description because even though we’re talking oysters, there are so many variables that make them distinct from each other.  From a textural standpoint, a good oyster is buttery and silky, with a nice pool of briny liquor in the shell. After that, everything depends on where the oysters are from.

How would you describe the flavor of a cooked oyster?

Flavorwise you’re looking at it being somewhat like what it tastes like in its raw state, but maybe with just a hint of bitter thrown in with the sweet and salt. The texture is entirely different – firmer. Cooked oysters are best when you’re serving them with something else, whether it’s a touch of lemon or sautéed with some shallots, garlic and wine. I love steaming them and dipping them into little bit of a garlic butter mix.  Fried, you can't go wrong. I mean, there's just so many ways you can serve them.

As the flavors of the oysters can often be delicate, what do you feel is the best way to choose a flavor complement that doesn't overwhelm?

Well, it really depends on what you’re trying to accomplish overall. They’re most delicate when they’re raw, but that’s also where you’re looking at them being the star of the whole show. You want something that’s going to make it pop just a touch, like an acid. Mignonette, a hot sauce, a light squeeze of lemon – that’s all you really need, because you’ve already got the sweet and salty, and the acid cuts straight through that. When you get into the more aggressive cooking methods, whether it's stewing or a doing a po' boy with fried oysters, that's where it can handle a little more heft and some robust ingredients.

How would you say environment overall affects the flavor of oysters?

An oyster is defined 100% by where it’s grown. Here in the Chesapeake, we’ve got a unique growing system—we’re on a peninsula only a few miles wide—so on one side we’ve got the bay, and the other we’ve got the open ocean. On our bay side the salinity – the amount of salt in our water – runs around 17 parts per 1000. Our seaside has salinities of about 32 parts per 1000. So, in the ocean it's essentially twice as much salt, which makes a difference, but it’s not the only thing that influences the flavor. A big part of it is diet, and the salinity has a lot to do with what’s growing in the water. You’ve also probably heard a lot about water temperature, which is true – a colder temperature usually results in a sweeter oyster, because different algae thrive in cold water than warm water. Our seaside is always colder, because the sun and overall temps can increase the temperature of a contained body of water like a bay far quicker.

How long does it take an oyster to mature?

That's very site- and technique- specific. For instance, our bayside site takes about two years on average to get the larger of the crop off, and at the seaside site is about one year, so twice as fast. A lot of that has to do with the fact that the water temperatures on the bayside get so hot in the summer –it basically mimics the air temperature –so if you have a week that's 90-degree weather, your water temperature is going to be near 90 degrees. What that does is hamper certain algae cells that the oysters feed on, so while they’re on a diet they get a bit lazy in the growing department.

What would you say is the difference between East Coast and West Coast oysters?

Well, again, it comes back to temperature. The West Coast (Pacific Ocean) tends to be a lot colder year-round, and that all comes down to ocean currents and ambient temperatures. They also have a completely different ecosystem, with different algae and other microorganisms in their water, plus varying salinity. They’re also using completely different species of oysters which thrive in that environment—often you can easily identify a West Coast oyster just by looking at the shell. Kumamotos are popular over there, which originated in Japan. They tend to be a little smaller, a little rounder.

Do you feel that farmed oysters are superior to wild forged oysters?

In a few ways, I would say, yes just because on a farm you really have the ability to control the size and shape of the animal. Customers like a nice three to four-inch oyster and that are uniform shape and size. When you’re out harvesting in the wild, you get a huge range of oysters: you could have a huge bed of year-old oysters, or you could be finding ones that are reaching the end of their life span. Aquaculture oysters offer a lot more consistency, as well as a traceable blueprint. We know everything about that oyster from its first day to the moment it’s harvested.

If you're not lucky enough to live in the Chesapeake area, what's the best way to store and transport oysters?

Well, it’s critical that the oysters are temperature-controlled to 45 degrees all the time. I prefer to store them in boxes because when you're going to store in the walk-in, a box affords the ability to keep the fan from blowing on them and possibly accelerating the dehydration process on the oyster.

What do you feel is unique about the oysters that come from your neck of the woods, Eastern Virginia?

You have the two distinct flavors being on the Eastern Shore–the bay and the ocean on either side of the peninsula which is only several miles wide. The range of salinities can be huge, as we have in our company. You get more of a range of flavors down here as opposed to other regions, where they’ve got access to only one water source.

Even though we’re talking about a geographical region, it’s still a very nuanced thing. I mean, an operation only a few miles away from me could have a pretty distinct difference in flavor. The best analogy I can make is to think of it like wine. Two vineyards right next door to each other are still going to make very different wines, even though the scenery is more or less the same. When we’re talking about oysters at sea, a few miles could make a big difference in flavor thanks to a whole slew of variables. 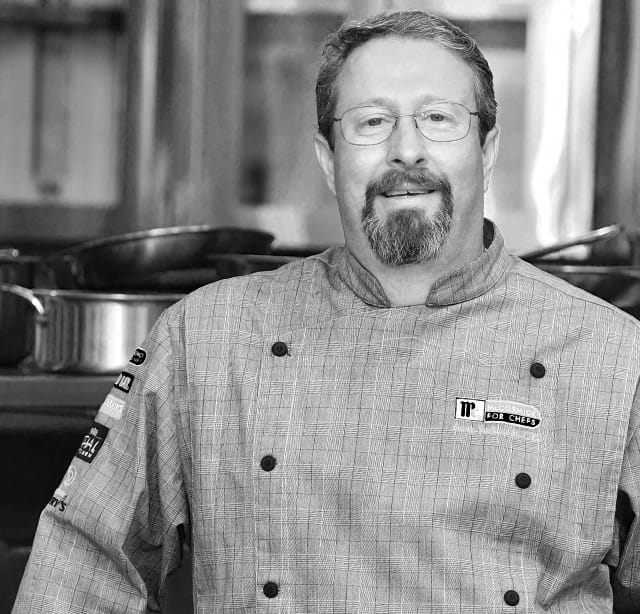 Chef Gary is our Executive Research Chef and Director of Culinary Science. He and his team work directly with global consumer brands, restaurants, and food manufacturing co

Tips from the Chef

The Flavors of OLD BAY 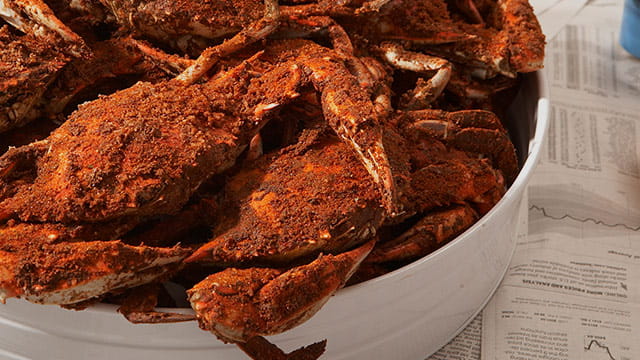 Get to know OLD BAY 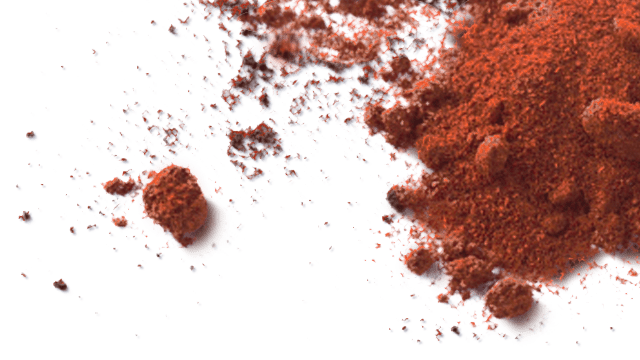