We had a great chat with Falkner about the development of her culinary style and how chefs today can learn from her love of flavor and experimentation. 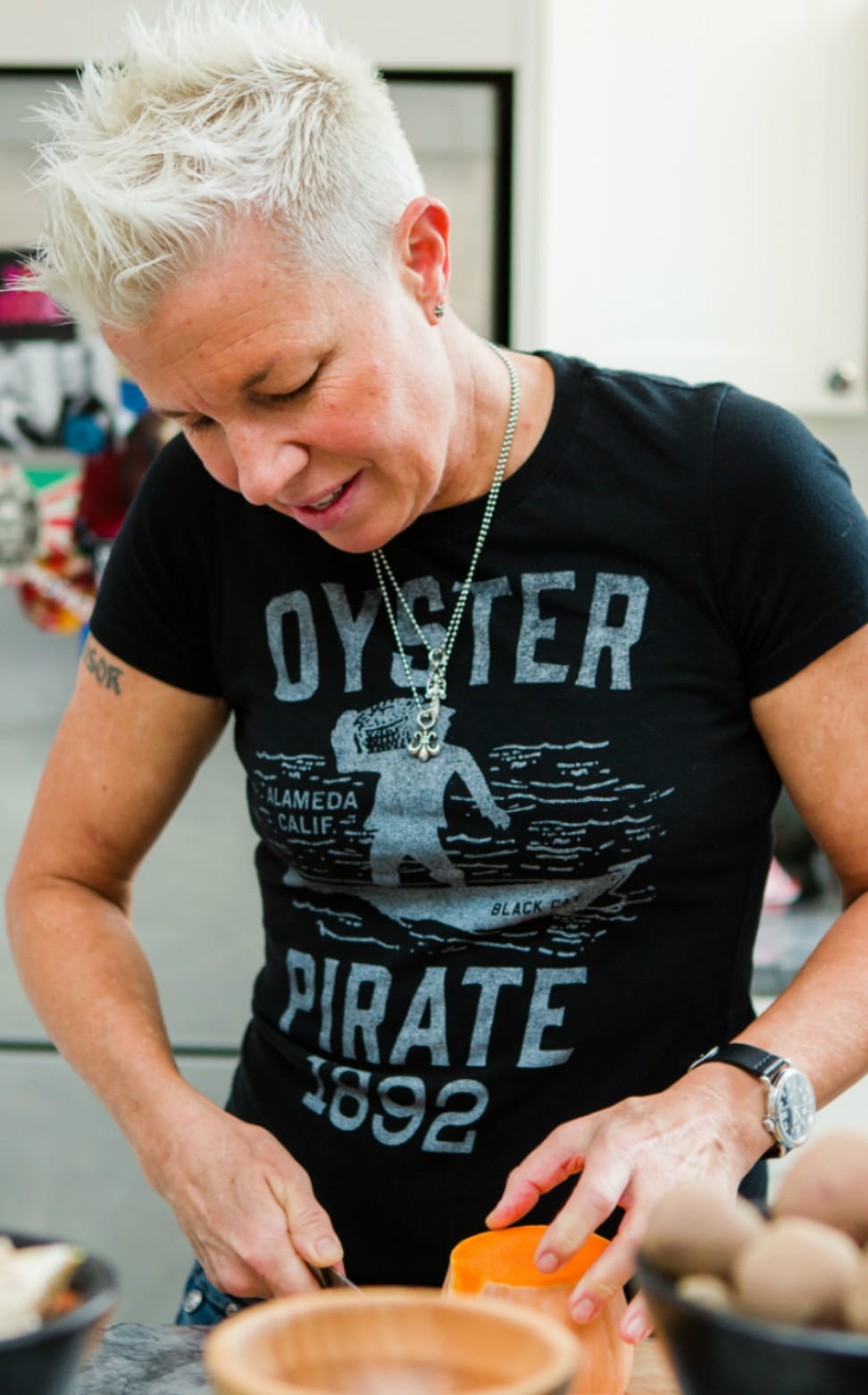 In your career, you’ve made the transition from pastry chef, executive chef, chef-owner to contestant and then judge on Top Chef. Explain the impact these transitions have had on your career in terms of your personal cooking style and the flavors created by it.

Just a little back history, I started out doing bistro work in San Francisco followed by a job in pastry. While I never originally set out to be a pastry chef, I realized I was pretty good at it. I also did a lot of catering work on the side and then opened my own place in 1997 — Citizen Cake. As I moved forward, I went from being recognized by James Beard in 2005 to being an Executive Chef to appearing on over 40 shows as a contestant or judge. All of these experiences have had an effect on my personal cooking style and what I’m cooking. Nowadays, I’m never very stressed when cooking under pressure since being a pastry chef makes you a very organized, disciplined individual and this has helped me in developing different techniques on all sides. I find my work has a different aesthetic than others’ baked goods as my style has always looked particularly modernist in comparison. Whether I’m cooking under the wire, in a restaurant or challenged to create something in under 30 minutes using limited ingredients on a TV show, I’m always learning.

What unique techniques and flavor pairings have you learned as a pastry chef that you’ve incorporated unexpectedly into your cooking today?

As a pastry chef, I never wanted to make super sweet dishes because that was not a driver for me. I like to look at classic themes and ask, “what else can we do with it?” We can’t just make and sell regular brownies. For example, instead of lemon cake, let’s make it with passionfruit. Often, it’s really about surprises in the familiar. My goal is to amplify certain tones while making others subtler, like sound design but in food.

I enjoy remodeling aspects in pastries to create a new architecture for flavors, which also helps me in savory cooking. I also try to integrate a lot of spices and herbs into what I’m making and will look to different cultures, languages and people to understand the foundations of certain cuisines and dishes to re-interpret without being offensive.

What is your flavor process for developing a new dish? Does it differ whether you’re developing something sweet vs. savory?

My process is about getting tired of everything else out there. A lot of times, menus and dishes are exploited so I take traditional plates and turn them into the unexpected. Other times, I find ingredients I’ve never heard of, like Sea Buckthorn, try them and they end up inspiring so many dishes, leaving me unable to get enough of them! I love to experiment heavily with a variety of dishes and ingredients like this to see how far I can take the flavors.

What’s one piece of advice that you would give chefs looking to experiment with different flavors on their menu?

My advice; understand the foundations of cuisines and then take it from there.

Whether a savory dish inspires a pastry or a cocktail inspires a dessert, aspiring chefs need to make things that can be understood. They must study and learn a given ingredient and then experiment from there. As badly as we’d like to just be able to jump into crazy experiments, doing so from the get-go can get frustrating and will likely require an actual framework, not unlike any other medium.

Whether you study music, dance or cooking, you simply cannot perform without guidance, planning and practice

What is Elizabeth Falkner’s signature flavor and dish?

This has changed over the years but something I often do, given the right opportunity, is making savory ice creams. Some original creations of mine have included custom flavor servings, like an everything bagel and cream cheese ice cream. I enjoy doing these creations because they’re so surprising.

You already have so much under your apron that most chefs only dream about. So tell us, what’s next for “Culinary Instigator” Elizabeth Falkner?

That has been a great question for me these days. I’ve realized that the last restaurant I opened here in NYC, I actually left 3 years ago now and have never really been drawn towards opening a new one. So, as for what comes next, I’ve actually written a memoir which will be released later this year. I am also working on a collaboration with my brothers called “Paradigm.” It’s going to be an artful presentation of food outside the restaurant context. I love restaurants and dining at them but I want to present the current issues, similar to the way an art gallery installation would with their methods. We’ll be using audio-visuals and eating opportunities, almost like a tasting menu but without the sit-down aspect.