Beyond One Thousand and One Nights - Returning to the Golden Age of Middle Eastern Flavors. 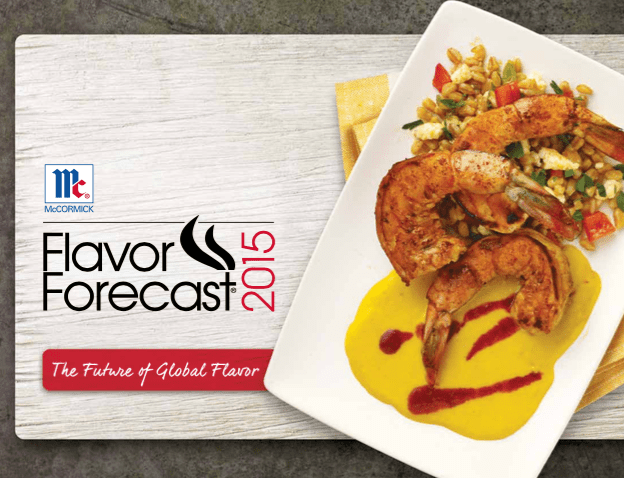 In the food world, it can be difficult to navigate through all the culinary trends, fads, campaigns, and flavor profiles of intriguing dishes these days. However, for those in-the-know, our Flavor Forecast has been an invaluable resource for the culinary industry. Since 2000, our company has predicted and foreshadowed emerging flavors, spices, sauces and much more with our annual Flavor Forecast. As industry leaders and an authority on all things gastronomy, we offer a wealth of information: the latest epicurean news, trends, recipes and flavor expertise.

In 2015 and beyond, we find ourselves at a crossroads of the two elements and end up with Middle Eastern Mezze. McCormick for Chefs and our industry insiders were at the forefront of this trend to share with epicurean trailblazers.

This trend is the intersection of ancient tastes, cultures and our love of travel. Centuries old recipes are passed down and reflect our civilizations’ exploratory nature in trading spices, herbs, and foods with one another. Today, we’re fortunate that it so easily culminates on our plates, thanks to talented chefs across the country and their inventive dishes. Perhaps the most alluring aspect is the nature of the trend itself; mezze means appetizers and it is similar to that of tapas - and just how it was the gateway to trying Spanish dishes, mezzes are doing the same for Middle Eastern cuisine. Both are also sociable in nature because the aim is to share amongst friends. It gives rise to the “try everything” culture - we can dabble in a wealth of diverse dishes - hearty dips, creamy spreads and heady spices - and indulge in hallmark tastes from Syria all the way to Morocco.

These five gastronomes across America offer their renditions of Middle Eastern Mezze:

Acclaimed Chef Michael Solomonov has been gaining much attention with his interpretation of modern Israeli cuisine at Zahav. Since the 2008 opening of his flagship restaurant in Philadelphia, he’s not only a notable cookbook author but he has also been praised by the likes of the New York Times, Bon Appetit and Eater. For one of his dishes, he transforms brussels sprouts into a work of art - the buds  are fried and tossed with baba ganoush (a creamy eggplant dip), hazelnut, and smoked shiitake.

Since opening their first restaurant in 1979, the Abi-Najm family has won many stomachs over with their Mediterranean cuisine. Chef Dany takes a beloved American staple and injects it with more flavor. The famed LT Burger is made with a grilled lamb patty that’s slathered with harissa mayo (red pepper sauce base infused with spices and herbs such as garlic, coriander, caraway), topped with fried onions, lettuce, tomato, and sandwiched between a toasted brioche bun.

Executive Chef Philippe Massoud offers modern interpretations of cherished dishes from his homeland of Beirut. In addition to being profiled by the New York Times and American Way, they’ve also proudly served Lebanon’s President and Prime Ministers. Chef serves Mouhamara (a family recipe from his grandmother); it is dip made by blending walnuts, sundried peppers, toasted bread, and pomegranate molasses together. It is perfect accompaniment to grilled meat or to smear on bread.

Chef Joseph Magidow’s restaurant Tawla is a media darling whose praises have been sung by the likes of Zagat, Eater, SF Magazine and many more.  In offering eastern Mediterranean cuisine - vegetable, fish, seafood are staples - but so too is their signature house labneh made from their heirloom yogurt. Toppings are on rotation but a popular favorite is mint-olive oil drizzle and a sprinkle of Maldon salt.

As a family owned and operated restaurant, Chef Stephan’s restaurant is a local gem in Doral, Florida.  The Mediterranean focused restaurant and gourmet marketplace offers one of their crowd favorites - Za’atar Crusted Lamb - which sees a half rack of Australian lamb Frenched and then generously encrusted with za’atar (a mixture of fresh thyme or oregano, toasted sesame seeds, cumin, sumac and salt); it’s grilled medium rare and served with Moroccan style couscous and sautéed vegetables.

Enjoying earthy, ancient spices and flavors from the Middle East are like peering into a window of our culinary heritage - and its popularity has never been stronger than now.

These dishes honor the legacy of our common ancestors and chefs are reviving traditions and reinventing classics with their own with unique and modernized twists. A penchant for sharing mezzes was a star flavor hallmark of 2015 test drive them in your restaurant today.

Don’t miss which past Flavor Forecast trend we unveil next.